NTR Gardens is constructed on the memory of late chief minister NTR. This gardens has some peaceful environment in the city center one can spend some peaceful time here. NTR Gardens article covers topics like Timings, Samadhi, Photos, Gardens In Hyderabad, About, Entry Fee, etc.

• NTR Gardens Hyderabad was built in the memory of Shri N T Rama Rao, former and one of the well known chief ministers of Andhra Pradesh.
• One of the latest additions to the NTR garden is the Desert Garden, a brian child of Mr. Nitish Roy, who did designing for the project.
• Another attraction is the restaurant ‘Machan’ which is a multi-storey restaurant that was built on a tree shape. The trunk was constructed using solid concrete boards. 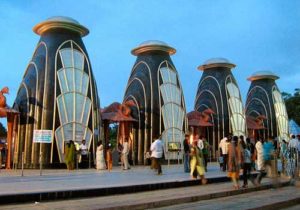 NTR Gardens Hyderabad was built in the memory of Shri N T Rama Rao, former and one of the well known chief ministers of Andhra Pradesh, the NTR Memorial Gardens is in the list of Hyderabad’s famous tourist attractions. Spread over an area of 36 acres, NTR Gardens offers a soothing atmosphere and a refreshing setting for spending time. The garden was built with an approximate cost of Rs. 40 crore. It was in 2002, when the Hyderabad NTR garden was opened to the public.The garden also offers various types of recreational options.

Some of them are by boat, a fountain, Roaring Cascade, Japanese garden, etc. There is a children’s playground which keeps the children entertained. The massive entry point with Nandi Bulls is also very captivating.It is close to the famous Hussain Sagar lake, which makes the visit to the park even more enjoyable. You can visit the 9 o’clock in the evening as the NTR Garden schedules are from 12:30 to 21:00. The entrance fee for NTR Garden is affordable for everyone. It is just Rs. 15 per person for adults while Rs.10 per person for children. If you want to click on some photos, you have to pay a fee of rs.30 per camera. For the video camera, the price is Rs. 65 per video camera.

NTR Gardens is a small 36-acre public park (0.15 km2; 0.056 sq mi) adjacent to the Hussain Sagar Lake in Hyderabad, Telangana. built in several phases since 1999, the area which is mainly a park is geographically located in the center of the city and is close to other tourist attractions such as Lumbini Park, Necklace Road and Birla Mandir. It is maintained by the project authority of Buddha Purnima who operates according to the directives of the Telangana government.In 1999, a 5-acre (20,000 m2) plot of 55 acres (220,000 m2) was used to erect a memorial for NT Rama Rao, who was the former Chief Minister of Andhra Pradesh, without border.

It was inaugurated by Chandrababu Naidu. It was planned to further develop this area, which was designated as NTR Gardens, by building a museum on N. T. Rama Rao. This memorial was part of the Buddha Purnima Project, which was handled by the Hyderabad Urban Development Authority (HUDA) for the beautification and development of Lake Hussain Sagar and its surroundings as a major tourist attraction.

In 2000, the Andhra Pradesh government expressed its intention to develop this area with several projects such as the NTR Gardens themselves, a rock garden and an IMAX theater. A few days later, a government official first stated that the rock garden would be taken over by the NRI-based Dubai at a cost of Rs. 27 crores. Secondly, the IMAX theater project, which would have cost Rs. 52 crore was awarded to a private company. These two projects were to be executed in the same 55-acre (220,000 m2) plot of land that housed the memorial. 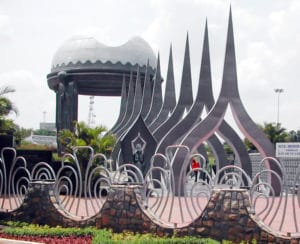 A mini-train on one track allows visitors to the garden to make your stay even more enjoyable. With the toy train, there is a wide range of recreational facilities at the NTR Garden. One of the recent updates to the NTR garden is the Desert Garden, a brian child of Mr. Nitish Roy, who did designing for the project. It consists of about 150 plant varieties, mostly of these plans which are commonly called desert plants such as succulents, cacti, etc. The plants, which also boast of medical importance and are used for various herbal remedies, have been brought to Hyderabad from different parts of the country such as Shirdi, Kolkata, etc.

The garden was created in such a way that it offers a breathtaking natural setting with many entertaining activities. Facilities for food are also provided to the garden. Several restaurants, cafes and restaurants, a 2000 sq m restaurant bypassed by three petal-shaped ponds, offer not only mouth-watering dishes, but also a magnificent setting to savor the same. The cafés are mainly cafes with a capacity of six seats and mobile. This gives visitors a unique experience on cafes.Another attraction is the restaurant ‘Machan’ which is a multi-storey restaurant that was built on a tree shape. The trunk was constructed using solid concrete boards while the branches are created with fiberglass and painted in green color, which gives it the appearance of a real tree. Also test local food products from different stands such as mirchi bajji while relaxing in the midst of the beauty of this garden.

This place welcomes you anytime in the year.

Hussain sagar lake is situated very near to Hussain sagar lake, Birla Mandir, Lumbini Park, Necklace Road and many other attractions of Hyderabad. As the Lake is located in the center of the city it is well connected by both public and private transportations like Bus, Cab, MMTS etc.