Another tourist attraction in Warangal a must visiting place is the Warangal Fort. Built on a hillock Ekashila in the 13th century, this fort is one of the architectural masterpieces of the Kakatiya dynasty. Built by King Ganapatideva and later by his daughter Rani Rudrama, Warangal Fort is symbolic of the historic opulence of the region under the rule of the Kakatiya Kingdom. Located next to the southeast of the city of Warangal, is an important landmark of the State of Telangana, presenting a perfect example of excellence in architecture and rich history.

Built in three layers of fortification ensuring absolute safety, the Warangal Fort impresses every visitor with its imposing structure. Although now in ruins, the remains of the fort still present an overview of the hypnotic know-how and breathtaking art that can be seen in the grounds, stone work, sculptures, etc. Fort of Warangal witnessed many battles; some of the fort parts have been destroyed by various invaders too. A visit to the fort of Warangal is sure to leave you fascinated with the grace of its architecture and brilliance which is view of the ruins now. The remains of the fort have been recognized as a monument of national importance by the Archaeological survey of India. 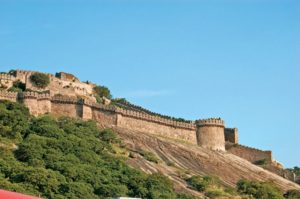 Initially, Warangal was ruled by Yadava kings in the eighth century later in the 12th century the Kakatiya dynasty was established in the region. Although the precise construction dating and further improvements is uncertain, archaeologists and historians agree that stone was replaced with brick in construction by King Ganapatideva, who died in 1262, and he was replaced by his daughter Rudrama Devi, who ruled until 1289, then her grandson Prataparudra II, whose reign was well known as a ‘golden age ‘. Twenty years later, his Kingdom was conquered by the Delhi Sultans.All three rulers Ganapatideva, Rudramadevi and Prataparudra II all added to height of the fort, build bridges, square and other strongholds circular earthen walls. This places the construction towards the end of the Kakatiya period.

In 1309, Malik Kafur, the general of Alauddin Khilji, attacked the fort with a large force of 100,000 men and surrounded. Prataparudra II, and his family protected themselves within formidable fort and fought bravely for several months with the invading army. After fighting for six months, Prataparudra II negotiates a truce to Kafur, then he surrendered all the wealth he has earned. This wealth also includes the famous Koh-i-Noor diamond. This seat has been chronicled by Amir Khusrow, which describes how the fortifications consisted of a structure of strong outdoor hardened mud with a deep ditch at the front which was to be filled with Earth until the army could overcome it. The inner fortress was built out of stones and surrounded by a ditch that was crossed by swimming by the Muslim soldiers.

The fort described by Khusrow corresponds to the two inner circles of fortifications that exist today. When Kafur finally left the fort in March 1310, he took the bounty on 2 000 camels with him. The conditions to forge peace with the Sultanate of Delhi included a clause that Pratapa Rudra would pay an annual tribute and would bow every day to Delhi as a tributary King indicating its status as subordinate to the Sultan of Delhi. After the departure of Kafur, Pratapa Rudra started acting again and during this time, that some of his surrendered kings had said they were independent rulers of their kingdom. But in 1311 Pratapa Rudra was to support the Sultan to invade the Tamil country of the Pandyas to Kanchipuram, which he did, and he also managed to get the region under his control.

Yet once in 1318 as Pratapa Rudra had ignored voluntarily to pay the annual tribute to the Sultans of Delhi, Warangal Fort was attacked and occupied. Military power superior of the army of the Sultan again forced Pratapa Rudra to sue for peace. The invaders had even set up a ramp of Earth 450 feet (140 m) through the moats that enabled them to breach in the walls of the fort and capture him. He has once again huge tribute to the Sultan in the form of a contingent of horses and elephants, which became an annual fee to pay for the Delhi Sultanate. After that he continued for peace, the Sultan gave him a “Club, a decorated dress (furgu) and an umbrella. And once again it has had to bow to the Imperial capital of Delhi as a mark of his vassal status.

When in 1320 Pratapa Rudra failed again in its annual payment to the sultans of Delhi, Delhi leader who had replaced Khilji, Sultan Ghiyath al – Din Tughluq, sent his son Ulugh Khan to collect contributions. For a third and final time, the fort was attacked by Sultan Muhammad bin Tughluq (r.1325-51), who was in the seat on the fort. Because of internal divisions, Ulugh Khan was retreating to Devagiri. After a temporary respite, Ulugh Khan in 1323 came with 65 000 soldiers mounted archery, attacked the fort and looted and destroyed the capital. In keeping with this tradition, the Muslim general Ulugh Khan ordered the destruction of the great Svayambhusiva Temple where the deity of the State had been deified.

All that is now visible of the temple are remains scattered around the fort. Then the Tughluqan built a huge mosque on one side of the fort, which has since been demolished. Pratapa Rudra, who had surrendered and was sent to Delhi, died on the way at the edge of the river Godavari. It is said that he committed suicide in 1323. The capital of Warangal was renamed then Sultanpur, and from 1324 to 1332 Imperial coins were minted there. The Delhi Sultanate managed to hold Sultanpur until 1335, when the Nayakas local (72 heads) formed a Union and took control.

The fort then came under the control of the dynasty of the Qutb Shahi of Golconda and later under the rule of the Nizam of Hyderabad.Subsequent changes to the fort were made between the 15th and 17th centuries, mainly with the addition of slit at the four gates in the wall of stone and the creation of doors in the wall in the ground.Remains of the structure can be seen today near the city of Warangal, which was the capital of Kakatiya. 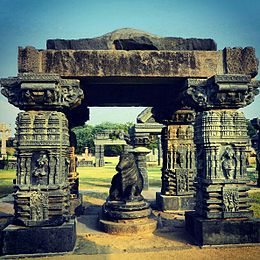 No discussion on the Warangal fort is complete without mention of its structural beauty. Warangal Fort has a glorious architecture. The fort consists of approximately 45 pillars/towers that are built on an area of about 19 km. The most attracting part of this fort is the ‘Gateway of glory”. It is one of most often covered image regarding Warangal fort. This main gateway consists of four remarkably carved massive pillars that have been built with the same rock. Standing strong these pillars are about 30 feet high and present complex cuttings should be noticing. These gateways are majestic and they also known under the name of the Kirti Toranas, represent South Indian architectural style.

In the middle of the fortress, there is a temple dedicated to the mother land called as Swayambhudevi Alayam. It is said that this temple was built by Qutub Shahi Kings. Its magnificent sculptures attract every visitor. Another temple of prominence here is the Temple of Shambhulingeshwara. Located in front of the open-air museum, this temple is dedicated to Shiva. The open-air museum is located in the center of the fort.

Warangal fort has three layers of enrichment. The fort had three circular walls, which created a strong defense. The first wall of the Warangal fort was built during the reign of Rudrama Devi. It’s a wall in the ground with a diameter of 2.4 km around this wall, there is a gap about 150 feet wide, who served at the outer edge of the fort. The second speaker, after the wall of mud and the ditch was a wall of stone of 1.21 km in diameter. This wall was built with stone of massive granite which were closely fitted together. This was done without mortar, featuring another sign of architectural masterpiece.

This inner wall stone was fortified to protect the central part, called fort. This wall was built by the King Ganapatideva, but its height was increased during the reign of Rani Rudrama Devi. This 29-foot long wall had 45 massive rectangular towers. There are 18 steps on the inner side of the wall in the ground. These steps composed of stone, provided access to various locations in the fort.The third ring of the wall is a wall of mud of 12.5 km in diameter. It encircles the city of Warangal.

Remains of the fortress of Warangal

Fort of Warangal has many ruins, especially its central part, which has been recognized as an archaeological area. Most of the Warangal fort pictures presents an overview of this section. There are ruins of the Temple of Shiva. You can also see entrance pillars, ceiling panels, slabs of wall, relic of the mihrab, many small shrines, etc. The main deity of the temple, Linga with four faces of Lord Shiva has been preserved in a shrine to the South of the fort complex. Regular prayers are offered to the Lord in the sanctuary again. In the fort complex, there are also ponds and various small temples. These remains provide a glimpse into the fort and the era of Kakatiya structure. Inscriptions on the pillars and walls also speak of the period of the reign of Kakatiya Kings.

The Warangal Fort opening hours are from 10:00 to 19:00. It is open every day of the week.Warangal for admission is Rs.15 per person for those who have Indian nationality. For foreign tourists, entry fees are Rs.200 per person. The video camera is Rs.25.

How to reach Warangal Fort