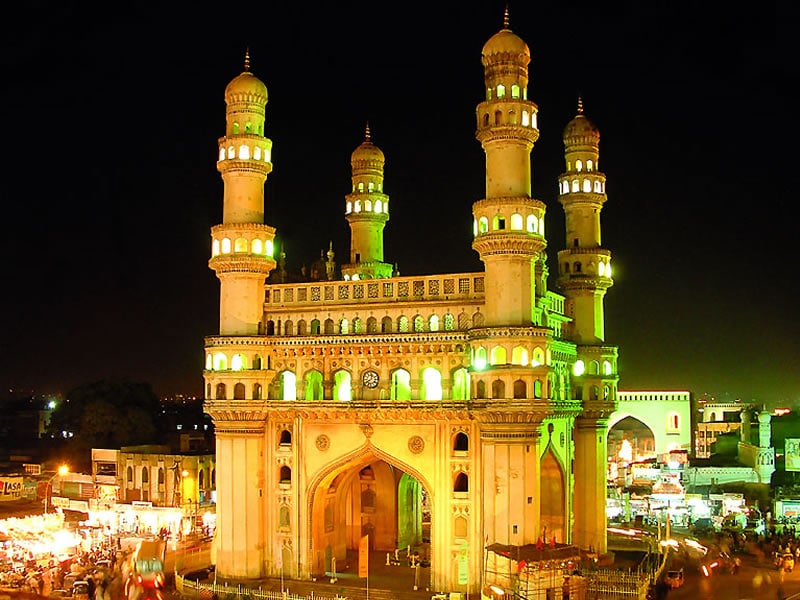 Charminar stands as icon symbol for Hyderabad Tourism. This is the must visiting place if you visit to Hyderabad. : Charminar article covers topics like Information, Salient Features, Images, Timings, Hyderabad Shopping, etc.

• Charminar was built in 1591 AD by Muhammed Quli Qutb Shah who was the 5th Sultan, of Qutub Shahi Dynasty
• It was built to commemorate the eradication of the plague.
• It was built in Islamic Architectural Style and the Materials used were Lime-mortar and Granite.
• The charminar was constructed with a sqare base of 20 m in width. The Four arches on each side are 20 m in height and 11m wide. The four minarets stand are at a height of 56m from the ground.
• On the shift of Mughal Governor between Qutb Shahi and Asaf Jahi rule, the South-Western minaret of Charminar “fell into pieces”, after being struck by lightning and was repaired at a cost of 60,000 rupees. In 1824, the monument was restored at a cost of Rs. 1 lakh.

The Charminar (“four Minarets”), built in 1591, is a monument and a mosque in Hyderabad, Telangana, India. The cue point became a global icon of Hyderabad, ranked among the most recognized structures of the India. The Charminar is located on the shore East of the river Musi. Laad Bazaar is located to the west of charminar and Southwest is richly ornamented granite Mecca Masjid. It was also listed as an archaeological and architectural treasure on the official ‘list Monuments’ prepared by the Archaeological Survey of India.

The English name is a combination and translation of the words Urdu Chār and Minar or meenar, translation of “four pillars”; the eponymous towers are adorned minarets set and supported by four large arches.Some of the popular myths that are registered in accordance with the architectural look of the monument are as follows: The Archaeological Survey of India (ASI), the current keeper of the structure, noted in there records that, “there are different theories regarding the reason behind building Charminar.

However, it is majorly accepted that charminar was built in the center of the city, to commemorate the eradication of plague”, which was a deadly disease that was widespread in this time as Muhammad Quli Qutb Shah had prayed for the end of the plague that ravaged the city and committed to build a mosque at the same place where he prayed. According to Jean de Thévenot, a traveller of the French of the 17th century, whose narrative was complemented by Persian texts available, the Charminar was built in the year 1591 it to commemorate the beginning of the second year of the Islamic Millennium (1000 AH). The event was celebrated all over the Islamic world, so Qutb Shah founded the city of Hyderabad to celebrate and commemorate the construction of this building.

Historian Masud Hussain Khan says that the construction of the Charminar was completed in the year 1592, and it’s the city of Hyderabad, which was actually founded in the year of the book 1591.According ‘Days of the beloved’, Qutb shah had built the Charminar in the year 1589, on the very spot where he has glimpsed his future Queen Bhagmati first, and after her conversion to Islam , Qutb Shah has renamed the city as “Hyderabad”. Although the story was rejected by historians and scholars, he became a popular folklore among the inhabitants.

Qutb Shah was also among the first poets Dakhani Urdu, laying a foundation for the Charminar performed prayers in couplets Dakkhini, which are counted as follows: Fill in this city of mine with people like, The you filled river with fish Oh Lord. On the shift of Mughal Governor between Qutb Shahi and Asaf Jahi rule, the South-Western minaret of Charminar “fell into pieces”, after being struck by lightning and was repaired at a cost of 60,000 rupees. In 1824, the monument was restored at a cost of Rs. 1 lakh.

The fifth ruler of the Qutb Shahi Sultan Muhammad Quli Qutb Shah dynasty built Charminar in 1591. After moving his capital to Hyderabad from Golkonda, he built a large structure of Charminar. Because of Charminar became landmark, later this monument is a global icon of Hyderabad. The Charminar was built at the intersection of the historic trade route linking markets with the city of Machilipatnam port of Golkonda.

The old city of Hyderabad has been designed with Charminar as its centerpiece. The city has been discounted around the Charminar in four different quadrants and chambers, seggregated according to the established settlement. To the North of Charminar the Kaman tank, either four gateways, built in the cardinal directions. Other prominent architects of Persia were asked to develop the plan of the city. The structure itself was designed to serve as a mosque and Madraasa. It is made of Indo-Islamic architecture style, incorporating elements of architectural Persian.

The Charminar Mosque is a square structure with each side 20 metres (66 feet) long, with four large arches each faced a point fundamental that open into four blocks. At each corner is a minaret of exquisite shape, 56 meters (184 feet) high, with a double balcony. Each minaret is crowned with a bulbous dome with delicate drawings of petaloid base. In contrast to the Taj Mahal, four fluted minarets of Charminar are built into the main structure. There are 149 winding provisions to reach the top floor.

The structure is also known for its profusion of stucco decorations and the disposal of its balustrades and balconies.The structure is made of granite, stone, lime, mortar and pulverized marble and it weighs about 14000 tones. Originally the monument with its four arches was therefore proportionately planned when the fort was opened one could catch a glimpse of the busy city of Hyderabad, as these arches of Charminar in the face of the most active royal ancestral streets. There is also a underground tunnel connecting the fort of Golconda to Charminar, although he does not know the location of the tunnel may be designed as a loophole for the leaders of Qutb Shahi in the case of a seat.  A mosque is located at the western end of the roof open; remaining part of the roof served a court at the time of Qutb Shahi. The actual mosque is on the top floor of the four-storey structure. An arch that stands inside like a dome takes in charge two galleries within the Charminar, one above the other and especially those a terrace that serves as a roof, bordered by a stone balcony. The main gallery has 45 places of prayer, covered with a large space open at the front to accommodate more people for Friday prayers.The clock on the four cardinal points has been added in 1889.

There is a vazu (tank) in the Middle, with a small fountain for ablutions before prayer in the Charminar mosque.The vicinity of Charminar are also known under the same name. The monument overlooks another large mosque called the mosque of Mecca. Muhammad Quli Qutb Shah, the 5th ruler of the Qutb Shahi dynasty, ordered bricks from the land of Mecca, the most sacred of Islam and site used in the construction of the central mosque arcade, hence the masjid is named as mecca masjid.There is a thriving around Charminar market: Laad Baazar is known for its jewelry, particularly exquisite bracelets and the Pather Gatti, who is famous for its pearls. At its peak, the Charminar market had some 14 000 shops.

In 2007, Hyderabadi Muslim living in Pakistan built an almost replica to the small scale of the Charminar at the main intersection of the Bahadurabad in Karachi neighbourhood. Lindt chocolate Adelbert Butcher has created a scale model of the Charminar out of 50 kilograms of chocolate. The model, which required the work of three days, has been exposed to The Westin, Hyderabad, India, on 25 and 26 September 2010.