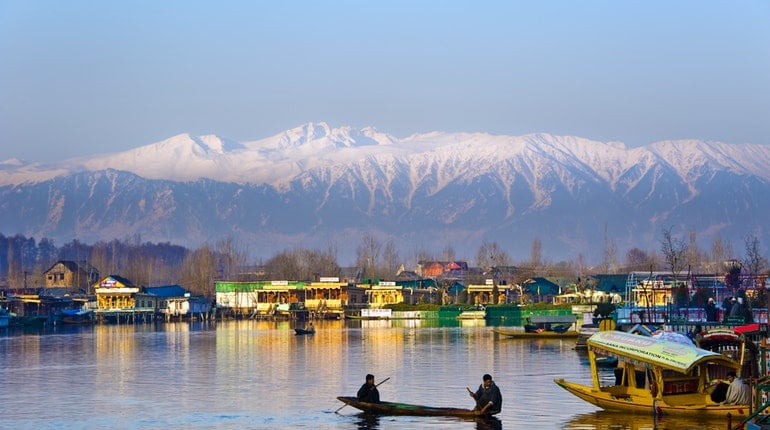 • Dal lake was second largest lake in Jammu and Srinagar.
• Dal lake was titled as “The jewel in the crown of Kashmir” or “The Jewel of Srinagar”.
• The shore line of the lake, is about 15.5 km (9.6 mi), is surrounded by a boulevard lined with Mughal era gardens, hotels, houseboats and parks.
• During the winter season, temperatures sometimes reach -11 ° C (12 ° F), at that time lake will be in complete frozen state.
• The Dal lake has been ruled by the Mughal, Afghan, Sikh rulers.

Dal is a lake of Srinagar ( In word Dal in kashmiri language represents Lake.), which is capital of Jammu and Kashmir in summer. The urban lake, which is the second largest in the state, is an integral part of tourism and leisure in Kashmir and is named “The jewel in the crown of Kashmir” or “The Jewel of Srinagar”. The lake is an important source of commercial operations in fishing and harvesting water plants.

The shore line of the lake, is about 15.5 km (9.6 mi), is surrounded by a boulevard lined with Mughal era gardens, hotels, houseboats and parks. Scenic views of the lake can be seen from the Mughal gardens such as Shalimar Bagh and Nishat Bagh, built under the reign of Emperor Mughal Jahangir and motor boats crossing the lake in colorful shikaras. During the winter season, temperatures sometimes reach -11 ° C (12 ° F), at that time lake will be in complete frozen state.  The lake covers an area of 18 square kilometers and is part of a natural wetland that covers 21.1 square kilometers, including its floating gardens. The floating gardens, also known as “Rad” in Kashmiri, bloom with lotus flowers in July and August. The wetland is divided by pavements into four basins; Bod Dal, Lokut Dal, Gagribal and Nagin (although Nagin can be considered an independent lake). Bod-dal and Lokut-dal each have an island in the center, well known as Sona Lank and Rup Lank (or Char Chinari), respectively.

At present, the gardens of Dal and Mughal, Shalimar Bagh and Nishat Bagh on its outskirts are undergoing intensive restoration measures to fully resolve the serious eutrophication problems encountered by the lake. Massive investments of approximately 275 million dollars (11 billion euros) are made by the government of India to restore the lake to its original splendor. Dal is mentioned as Mahasarit in ancient texts in Sanskrit. Historical antecedents mention that a village named Isabar east of Dal was the residence of the goddess Durga. This place was known as Sureshwari at the shore of the lake, which came from a spring called Satadhara.

During the Mughal period, the Mughal leaders of India designated Kashmir, especially Srinagar, as a summer holiday resort. They have developed the Dal enclosure in Srinagar with gardens and Mughal-type pavilions, as resorts, to enjoy the healthy and fresh climate. After the death of Aurangzeb in 1707, which resulted in the disintegration of the Mughal Empire, the Pashtun tribes in the area around the lake and the city rose, and the Durrani Afghan Empire dominated the city for several decades.

In 1814, an important part of the Kashmir Valley along with Srinagar, was ruled by Raja Ranjit Singh to the kingdom of Afghans, and the Sikhs had an influence in the region for 27 years. During the Dogra Raj, Srinagar became the capital of the Dogra dynasty, fascinated by the cool climate of the Kashmir Valley, in the middle of the fall of the majestic Himalayas covered with snow. The lakes’ chambers have temperatures of 1 to 11 ° C (34-52 ° F) during the winter and 12 to 30 ° C (54-86 ° F) during the summer season. In winter season the lake freezes when temperatures drop to about -11 ° C (12 ° F). Although the Dogra Maharaja of Kashmir has restricted the construction of houses in the valley, the British have bypassed this rule by ordering dark houses to build on Dal.

Motor boats were called “each of them, a small piece of England afloat on Dal”.After the independence of India, the inhabitants of Kashmiri Hanji built, owned and maintained these Houseboat, growing floating gardens and producing products for the market, making them the center of their livelihoods. The Houseboats, closely related to Dal, also provide accommodation in Srinagar. Following the Mughal, Afghan, Sikh domination, the place won the epithet: “Jewel in the crown of Kashmir”.

There are three islands in the lake; Three real islands anyway, there are other types of islands connected by roadways. Around the lake are many interesting sights of Srinagar, especially the pleasant gardens of Mughal. It is also flanked by hills, especially along its eastern shore. The hill of Shankaracharya offers a beautiful view of the lake.

The largest group of houseboats is located along the western edge of the lake near Lake Boulevard, towards Dal. They are bordered by looped lines and around small islands. Several hotels can also be found on the flat islands of the lake. Beyond the barges to the northwest are the floating gardens.

The lake is probably the most beautiful when the lotus flowers bloom in July and August. The floating gardens are well known as “Rad” in Kashmiri, are one of the foreign aspects of Dal Lake. They are composed of coiled vegetation and soil, which are far from the bottom of the lake and towed to an ideal place where they are moored. Tomatoes, cucumbers and melons thrive greatly in these gardens, if you look under one you can see that they literally float on the lake.

One can also reach the floating gardens by the road; The boulevard covers the eastern edge of the lake offering beautiful views though out journey. It will often be seen that the weeds have come out of the lake – it has a dual purpose. The streams of the lake remain clear and the weeds are rotten until they form an excellent compost for the gardens. The superficiality of the lake and its strong growth of water grasses are probably the main reason why there are very few motorized boats on the water. Dal Lake would nowhere as enjoyable if there were motor boats rushing on a quiet surface.

There are many tours around the lake, but by the best way to see all places it is to take a Shikara for a day and make a tour of the Mughal Gardens. At a reasonable price, there is practically no other way more lazy and more enjoyable to enter the swing of Srinagar.

There are plenty of accommodation options in Srinagar ranging from economical hotels, from mid-range hotels to luxury hotels. Houseboats on Dal Lake is a popular accommodation option. With breathtaking views of Dal Lake and the mountains surrounded, they also offer a pleasant experience. Most houseboats are run by families living in Dal Lake. Floating homes are also available in budget varying from mid-range to luxury.

Srinagar has delicious receipes. Countless street stalls, cafes and restaurants serve delicious food. The most popular places to dine in Srinagar are located near Khayam Road, Lal Chowk and the area near Dal Lake. The Kashmiri and Moghlai kitchens are extremely popular and serve in almost every restaurant.

Srinagar is famous for its non-vegetarian specialties such as gosgan rogan, gushtaba, rishta, tabakmaaz, kanti, etc. There are some restaurants that provide a tasty vegetarian meal along the road near Dal Lake. Seekh Tuji is a popular delicacy found in the street stalls of Khayam Road.

May to November is the best time to visit Dal Lake as the climate is pleasant. In winter it is extremely cold.