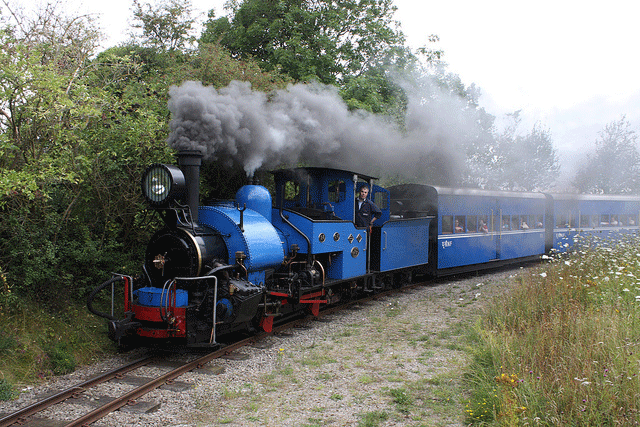 1. Darjeeling Himalayan Railways was declared one of the world heritage sites by UNESCO in 1999.
2. This train takes four trips during the day, two in the middle of the morning while others two in the afternoon.
3. The train stops for 10 minutes in Batasia by looping around a beautifully maintained garden.

Overview of the Darjeeling Himalayan Railway

A visit to the city of Darjeeling is incomplete without a joyride at the Darjeeling Himalayan Railway toy train. Moving at a snail’s pace on rough terrain, this is an experience that nobody wants to miss.

A small steam engine pulling the mini-coaches winding through the steep mountains that cross breathtaking panoramic views is the joy of driving the incredible Himalayan Darjeeling train. Also known as ‘Toy Train’, he overcomes several turns and curves impossible on his path presenting brilliant engineering skills. More than once, there will be many children from school who move on and off the train.

It is a two-hour trip around Darjeeling to Ghum, then covering about 14 km. During your journey you can also see the War Memorial built in honor of the Gorkha soldiers who sacrificed their lives. The epic tour on DHR Toy Train offers unparalleled views of the city of Darjeeling and the snow-capped peaks of Kanchenjunga.

How to reach Darjeeling Himalayan Railway

You can easily get around the city if Darjeeling with a good mode of transportation. The best option to reach your destination is hiring a taxi (usually on sharing), or a Jeep (ten passengers).

The Darjeeling Himalayan Railroad traced its history until 1879 when its construction began. Mr. Franklin Prestage gave the proposal for the installation of a steam tramway between Siliguri and Darjeeling.The first section was opened in 1880 from Siliguri to Kurseong; However, the line was officially opened from 4 July 1881.The line still serves humanity with its headquarters in Kurseong.There is a DHR museum where visitors visit for 30 minutes. Here, the main feature is the oldest toy train engine – The Baby Sivok.

The original track distance was 83kms. Later, the track was extended from Siliguri to New Jalpaiguri for about 5 km. For the end-to-end race between New Jalpaiguri in Darjeeling, steam locomotives have now been replaced by diesel locomotives for better speed and efficiency. The first trains of steam towed toys took nearly 10 hours to complete the journey. Discover Toy Train Route for a full description of the DHR route and experience the journey as you descend from the lower plains to the greatness of the Himalayas.

On March 4, 1881, the Indian Viceroy Lord Lytton inaugurated the Darjeeling Himalayan Railway by traveling the first leg of the journey from Siliguri to Tindharia. Lord Lytton was accompanied by his wife Lady Lytton who was known to wear a fashionable hat.The Franklin Prestage, the agent of the East Bengal Railways, who proposed the proposal to the government. If you visit the Cathedral of the Convent School in Loreto Darjeeling, you will see a plate with an inscription that puts it in memory as “founder of the Darjeeling Himalayan Railway Company …”. This plate was laid by his widow wife and his children when he died on October 18, 1897 near Simla.

Arriving at the ingenious engineering in the laying of the tracks of the Darjeeling Himalayan along the steep mountains. Several innovative engineering models have been used. However, three ideas of this kind are distinguished from the rest. One of the major problems was the steep gradients at several places where trains could not simply negotiate. A great engineering technique was to create a double loop at Chunbhatti and a unique loop at ‘Agony Point’ to gain ease.

The same design was then extended to create the famous Batasia Loop to negotiate a steep descent.The second excellent idea occurred during the encounter of unrivaled gradients where even the loops were not possible. The frustrated entrepreneur Herbert Rumsey who posed the railways shared the problem with his wife. And she replied innocently: “If you can not go ahead, why do not you go back”, that means that a reversal is allowed in a ball if one stops in a corner. This simple idea led to the creation of Z Reversals or Zigzags.

The train passes several meters backwards, then takes a run on a different track to get an elevation.There is another romantic version to the above idea. In response to a letter from a husband who was a construction engineer at the Darjeeling Himalayan Railway, the woman wrote, “If you can not go ahead, come back …”. She meant that if he could not go ahead with his work, it would be better if he went back to England. Many say that this letter lead foundation for zigzags

The third unbelievable fact was that no tunnel was created in the mountains. Although after the earthquake of 1934 a small tunnel was to be created near Chunbhatti, which was also abandoned after the landslides of 1968.In 1944, the Darjeeling Himalayan (DHR) Railway had 39 steam-powered locomotives and a workforce of more than 2000. The DHR workshop at Tindharia had 17 towers and many other machines that could Manage all types of technical problems and maintenance of engines and coaches. However, much of this is now gone. In fact, on those days, the DHR had an excellent football team known as TREFA which was then dissolved.

After the independence of India, it was known that the curtain had to fall on the private property of Darjeeling Himalayan Railway. On 20 October 1948, DHR was bought and controlled by the Government of India. James Shaw served as the last English general manager of the DHR. Although most English working in the DHR were offered jobs at one third of their previous wages, none took the offers. On January 15, 1958, the DHR was awarded to Northeast Frontier Railway (NFR). On 2 December 1999, UNESCO granted World Heritage Site status to DHR, which became the second railway in the world to receive this status.