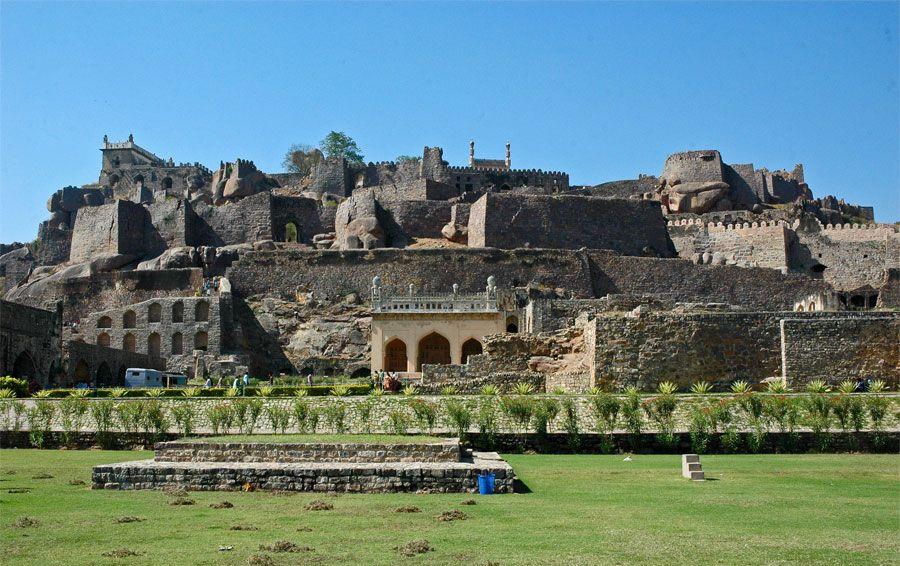 Golconda Fort has seen rise and fall of many empires and replicates the History of Hyderabad. Golconda Fort article covers topics like Timings, Information, Entry Fee, Images, Secrets, How To Reach, History, etc.

• Golconda Fort was known as Mankal in ancient times.
• The name Golconda arrived from the word Golla konda which means shepherd hill.
• Golconda Fort built on a hill in the year 1143. It was built using muddy soil under the reign of Rajah of Warangal.
• Golconda was fortified between the fourteenth and seventeenth centuries by the Sultans Bahmani and then the Qutub Shahi dynasty.
• Golconda was the capital city for Qutub Shahi kings.
• World famous diamonds like The Daria-i-Noor, The Koh-i-Noor were present in this place.
• Applauding at a certain point near the entrance to the dome is clearly reflected in the pavilion of the hill, almost a kilometer away.

Golconda Fort is located in the western part of the city of Hyderabad and about 9 km from Lake Hussain Sagar. The exterior fort extends to an area of three square kilometers, or 4.8 kilometers in length. It was originally known as Mankal, and built on a hill in the year 1143. It was originally a muddy soil under the reign of Rajah of Warangal. Later, it was fortified between the fourteenth and seventeenth centuries by the Sultans Bahmani and then the Qutub Shahi dynasty. Golconda served as the capital city for Qutub Shahi kings. The inner fort contains palace ruins, mosques and a high hill pavilion, which rises about 130 meters high and gives an aerial view over other buildings.

The fort of Golconda is undoubtedly one of the most beautiful fortress complexes in India. The history of Fort Golconda dates back to the early 13th century, when it was controlled by the Kakatiya followed by the kings of Qutub Shahi, who ruled the area in the 16th and 17th century. The fortress rests on a 120-meter-high granite hill, while huge crenellated ramparts surround the structure. It was initially Shepherd’s Hill, that is to say Golla Konda in Telugu, according to legend, on this rocky hill a shepherd had met an idol and the information was transmitted to King Kakatiya at that time. The king built a mud fort around this sacred place and after 200 years, the Bahamani leaders took possession of the place. Later, the Qutub Shahi kings transformed it into a massive granite structure extending 5 km in circumference. The fort is seen as a mute witness of historical events.

The Qutub Shahis reigned in Golconda ended in 1687 when it was arrested by the emperor Mughal Aurangzeb, who intentionally abandoned it in ruins Golconda still boasts of mounted guns, four bridges, eight bridges and majestic rooms, magazines, stables, and so on. The outermost enclosure is called Fateh Darwaza, which means the Victory Gate, after Aurangzeb’s army crossed this gate. At Fateh Darwaza, one can witness fantastic acoustic effects, which is one of the many famous engineering wonders in Golconda. Applauding at a certain point near the entrance to the dome is clearly reflected in the pavilion of the hill, almost a kilometer away. This served as a warning note to the residents of the fort from any imminent danger, of course, that now entertains visitors. The fort gains an impressive place among the architectural wonders and heritage structures of India and testifies to the glorious past of Hyderabad.

The Daria-i-Noor
The Hope Diamond
The Koh-i-Noor

The Golconda fort had an arch where once the famous diamonds of Koh-i-Noor and Hope were stored with other diamonds. Golconda is famous for diamonds found south-east of the Kollur mine near Atkur, Guntur district, Paritala and Kollur in Krishna district and were cut in the city during the reign of Kakatiya. At that time, India had the only known diamond mines in the world. The Golconda mines yielded many diamonds.

Golconda was the trading town of the diamond trade, and the gems sold came from a number of mines. The fortress-city was famous for the diamond trade. However, Europeans believed that diamonds were only found in the fabulous Golconda mines. Beautiful diamonds were taken from the mines in the area around Golconda, including the Daria-i-Noor or Sea of Light, 185 carats (37.0 g), the largest and finest Diamond jewelry from the Crown in Iran. Its name has taken on a generic meaning and has been associated with great wealth. The gemlogists use this classification to designate a diamond with a complete (or almost complete) lack of nitrogen; The material “Golconda” is also called “2A”.

It is believed that many famous diamonds have been dug in the Golconda mines, for example:

In the 1880s, name of “Golconda” was used generically by anglophones to refer to a particularly rich mine and later to any source of wealth. During the Renaissance and early modern times, the name “Golconda” acquired a legendary aura and became synonymous with vast wealth. The mines brought wealth to the Qutb Shahis of Hyderabad State, who ruled Golconda until 1687, and then to the Nizam of Hyderabad, which ruled after the independence of the Mughal Empire in 1724, To 1948, when the Indian integration of Hyderabad occurred.

Qutub Shahi Tombs: The tombs of the Qutub Shahi sultans are located about one kilometer north of the outer wall of Golconda. These structures are made of beautifully sculpted stones and surrounded by gardens. They are open to the public to view and enjoy.

Golconda was originally known as Mankal. Golconda Fort was built for the first time by the Kakatiya dynasty as part of its western defenses, in the direction of Fort Kondapalli. The city and fortress were built on a 120-meter (480-foot) granite hill, surrounded by massive massifs. The fort was rebuilt and reinforced by Rani Rudrama Devi and his successor Prataparudra. Later, the fort was under the control of Musunuri Nayaks, who conqured from the Tughlaqi army occupying Warangal. Musunuri Kapaya Nayak ceded to the Sultanate Bahmani in the framework of a treaty in 1364. Under the sultanate of Bahmani, Golconda gradually moved to prominence.

Sultan Quli Qutb- ul-Mulk (circa 1487-1543), sent as governor of Telangana, established him as the seat of his government around 1501. The Bahmani rule lost control during this period and the Sultan Quli officially became independent in 1538 and founded the Qutb Shahi dynasty based in Golconda. Over a period of 62 years, the soil of the mud was enlarged by the first three sultans Qutb Shahi in the present structure, a huge fortification of granite extending around 5 km in circumference. It seved as the capital of the Qutb Shahi dynasty until 1590 then the capital was transferred to Hyderabad. The Qutb Shahi dynasty then expanded the fort, whose 7-kilometer (4.3-mi) outer wall was surrounded by the city.The fort finally fell into ruin in 1687, after a harassment of a year leading to its fall at the hands of the Mughal Emperor Aurangzeb

You can visit Golconda any time throughout the year. Evening times could be best time to visit the fort. Generally temperature really goes high in summer season(march to may), so people who do not go out in hot weather can choose other timing in year.

Golconda is a historic fort visitors have lot of things to see inside the fort. Generally it takes 4-5 hours to see the fort completely.

Arrive to this impressive structure is fairly simple thanks to Hyderabad’s excellent transport system. One can easily hire a taxi, a bus or own vehicle.

1. Carry water and food with you by visiting the fort.
2. Do not throw wastage around the place. Use the dust bins located nearby to throw away the garbage.
3. Wear comfortable clothes and shoes as there will be a lot of walking.
4. The luminous laser show is the highlight of the fort, do not miss if time permits.
5. It is advisable to take a guide to understand the uniqueness of this remarkable historical structure.