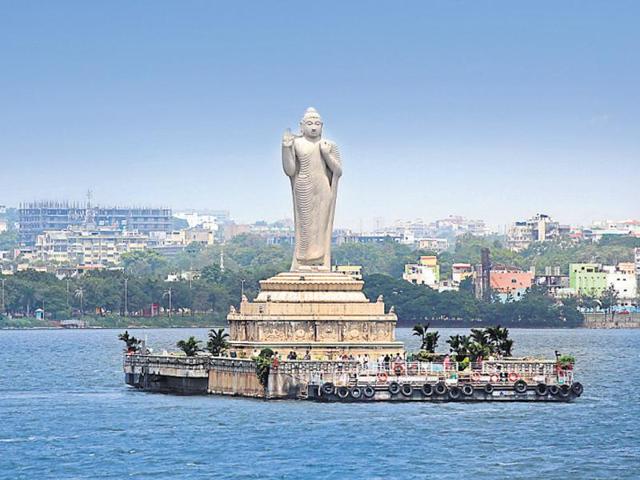 • On the shores of this lake Hussain Sagar, the treaty between Mughals and Golconda was signed.
• The largest artificial lake in Asia, Lake Hussain Sagar was dug in 1562 AD during the reign of Ibrahim Quli Qutub Shah.
• In the middle of the lake you will find an enormous statue of Lord Buddha which is 16 m high and weighs nearly 350 tons.
• Hussain Sagar, a heritage site in India, was named “Heart of the World” by World Tourism Organization on 27 September 2012.

Until the year 1930, it was used for the same purpose.Having been bordered by Indira Park to the east, Sanjeevaiah Park to the north and Lumbini Park to the south, the lake presents an unusual setting to be found in the middle of any city. There is also a gates on its banks, which was constructed to control the flow of water. This artificial lake embellishes the city with elegance. Not only for beauty, but also for its historical connection. On the shores of this lake Hussain Sagar, the treaty between Mughals and Golconda was signed.In the middle of the lake you will find an enormous statue of Lord Buddha which is 16 m high and weighs nearly 350 tons.

Composed of white granite, the statue is on the “rock of Gibraltar”. The laser show at the statue is something worth watching.At the same time, there are also about 30 statues of famous personalities around the lake.A popular recreational area, Lake Hussain Sagar attracts visitors of all age groups. Whether it is a family picnic or an outing with friends or your partner, this lake is visited by all Hyderabadi. Boating at the lake is quite pleasant. There are various boating options at Lake Hussain Sagar, such as motor boats, boats, etc.

Another major attraction of the lake is the 48-seat launch which also offers guests dinner as well as private sessions if necessary. You can also parasailing at Lake Hussain Sagar or water skiing, although the schedules and availability of these activities vary from time to time. The cruise to the lake makes the visit more and more enjoyable.You can visit the lake throughout the week; It is open every day. The schedules of Lake Hussain Sagar are from 8 am to 10 am. Even a simple long drive on the roads next to the lake is also quite refreshing.

The lake had named as Hussain Shah Wali, who guided the design of the lake. It is an artificial lake that contains water fed by canals from the Musi River. Hussain Sagar was Hyderabad’s main source of water before Himayat Sagar and Osman Sagar were built on the Musi River.Hussain Sagar, a heritage site in India, was named “Heart of the World” by World Tourism Organization on 27 September 2012 to be the largest heart-shaped brand.

The entry fee for the lake is free but you need to pay money for Boating. There are plenty of options in the boating as listed below.

You can visit Hussain Sagar Lake8 anytime in the year.

Boating is the most common thing every tourist likes to here. Apart from that you can also do Para Sailing.You can also explore other tourist places in Hyderabad. NTR Garden, Birla Mandir are located nearby. If you are interested, you can visit Hussain Sagar with the Jalavihar water park, combining the excitement of water games and the soothing of the lake for a perfect day.

Lake Hussain Sagar also benefits from a good location. It is easily reachable from the rest of the city and is well served by local trains as well as buses, taxis and cars.