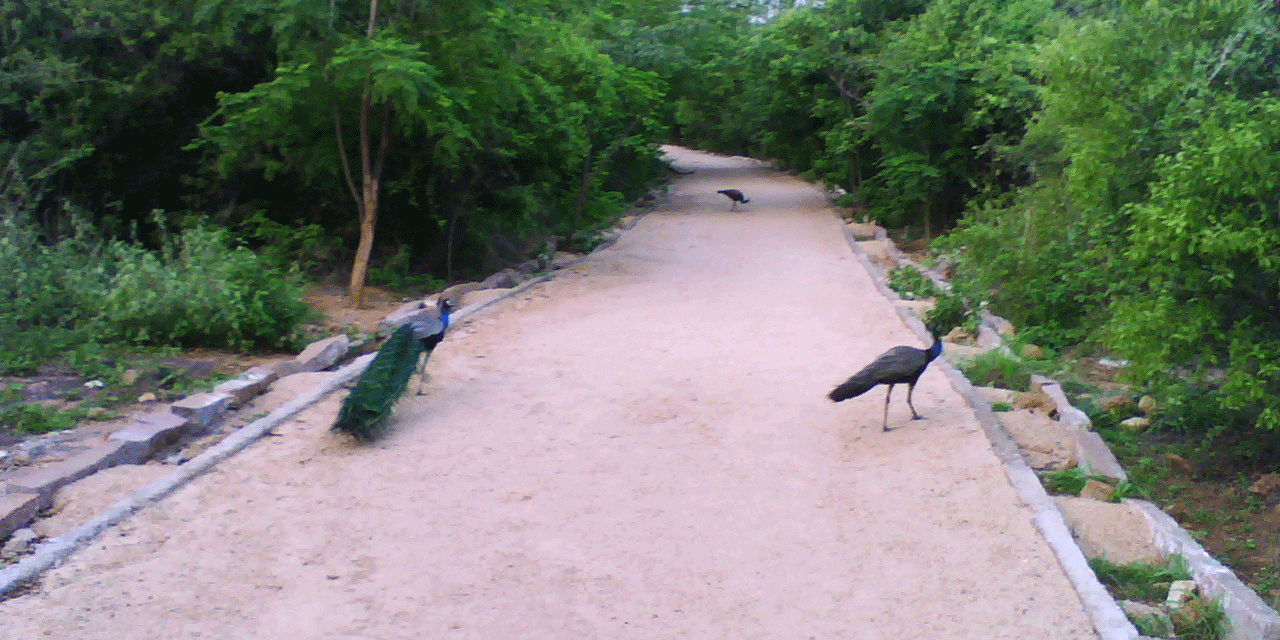 • The entire park was declared a national park by the State Government of Andhra Pradesh after obtaining the approval of the central government in 1998.
• KBR National park has about 600 species of trees and plants in the park

Kasu Brahmananda Reddy National Park is well known as Chiran Fort Palce, which is located at Jubilee Hills in Hyderabad, India. The park has an area of around 390 acres (1.6 km2). The entire park was declared a national park by the State Government of Andhra Pradesh after obtaining the approval of the central government in 1998. It is located in the center of Jubilee Hills and is described as a jungle in the middle of The concrete jungle. He has peacocks and other animals.KBR National Park is a vast expanse of lush greenery and rich fauna that is located in the middle of the city of Hyderabad – Jubilee Hills.

Named by former Chief Minister Kasu Brahmananda Reddy, this park promises a rejuvenating nature amidst concrete buildings and trafficking in city life. A popular place to visit in Hyderabad, this park, as well as its picturesque beauty and flora and fauna, are also historically significant. Chiran Palace of the ancient Nizam of Hyderabad is a place to visit. It was created in 1994 with the aim of preserving the nature of this area. One of the most popular tourist places, KBR national Park is a must visit place in Hyderabad tour.

The KBR National Park has a rich flora and fauna accompanied by a refreshing environment ideal for relaxing. There are about 600 species of trees and plants in the park. The park has an equally rich fauna. It has about 140 species of bird fauna as well as 20 species of reptiles and 20 species of mammals. There are also about 15 different species of butterflies.This area was declared a national park in 1998 by the state government, after central government approved by it. It was then declared as Kasu Brahmananda Reddy National Park in memory of Kasu Brahmananda Reddy, who was the late Chief Minister, who was one of the popular leaders of the state.

One of the significant palaces like Chiran Palace were built in this park in 1940. The entire palace complex spans an area of 360 acres and was handed over to Prince Mukarram Jah on his crowning by his father, Prince Azam Jah in the year 1967.The complex has the palace and, in addition, the other property includes the Gol Bungalow, bungalow Mor (paved) on a butte; cattle, horses and Stables for elephants, the khana engine that housed a fleet of exquisite old cars, several basements, a heavy machinery workshop, two wells and an equal number of water tanks,gasoline pump.
Other Facilities

In Zone Unit 2 Watch Towers are present in the park, ie Mor House and also the Watch Tower near the palace. Look at the unit of the tower area located at points of view of where the complete space of the park is located. A watch tower is for guests Watch Tower with a height of thirty feet is a construction in 2012, wherever we will have a bird’s eye on the park. An additional climbing tower exists near Chiran Palace, built in 1999 and a height of twenty feet.

In 2015, the grid of the associated integrated bio-metric system of associated degree is placed at the main door and the ordinal door to prevent the entrance of anti-social rooms in the park and to secure the guests, Flora and Fauna in the park.

CC CAMERAS TV: The park includes telephone affiliation. All employees in the park received a wireless network and a mobile phone. The wireless network has been very useful in protecting and managing the park. In 2014, thirty two CCTV cameras were installed in the parks, distinguishing the main strategic and vulnerable points where there is a risk of causing a threat to life and therefore guests in the way of their hikers. The dominant goal is uninterrupted in the rooms of the Divisional Forestry Officer. The footage and therefore the videos can be discovered from the Divisional Forestry Officers’ Chamber with a backup for three to four months.

NATURE CAMP SHED: Character camps are also organized on Sundays for the good on the plus. Tourists density is more on Sundays. In these natural camps, the measurement of the places of the customers is given with the opinion on the life, the conviviality and the way to stop the pollution and to minimize the plastics in the daily life. As part | A region | A district | A neighborhood| A section | A square measure | A locality | A neighborhood of natural camps The snake shows are organized by the management of the KBR National Park for the good on the guests Who come to the park in the morning and evening.

Maintenance: The park now contains a network of track activities 5.00 Kms. In the traveler’s area. Water splashes are created through the tracks at regular intervals to interrupt the flow of rain and to drain water into adjacent trenches and water harvesting wells. The square measurement of the tracks was repaired as necessary and when necessary and the square measurement uninterrupted in the correct form.

Cross-over evacuation was carried out where streams crossed roads to confirm the free flow of water and avoid road damage. It is suggested that the water barrier pathways and therefore the structure of the squares of the cross-drain structure have been maintained throughout the year. It is suggested jointly to provide water sprinklers along the track method to the associated nursing interval of twenty-five meters in length.

You can visit this park anytime in the year.