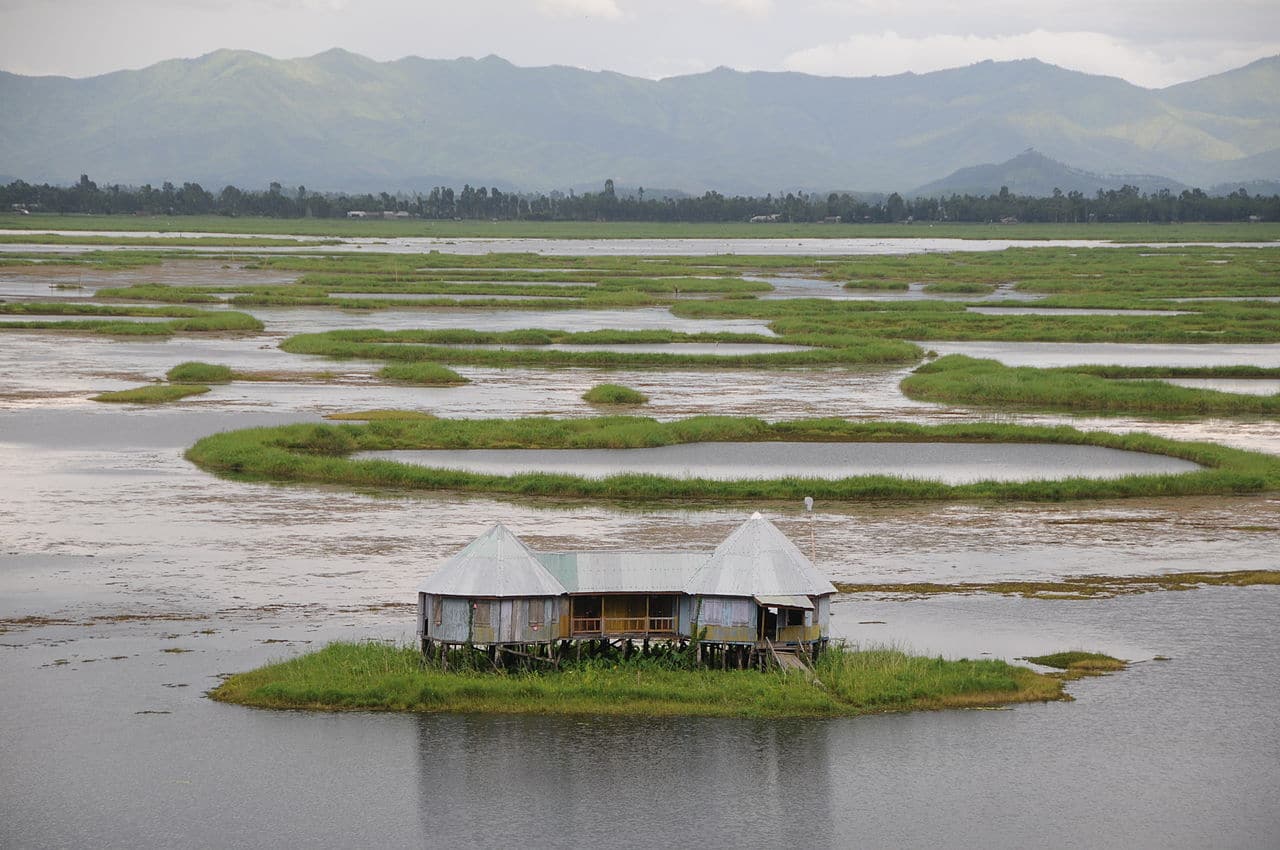 Loktak Lake and Sendra Island are one of the most beautiful attractions of the state. Located about 50 km from Imphal, Loktak Lake is situated in the Imphal Valley and is home to all rivers and streams in the state of Manipur. Loktak Lake article covers topics like Sendra Island, Map, Image, Tourism, Location, Video, Phumids, Flights, National Park, etc.

Loktak Lake and Sendra Island present a combination of beauty unmatched elsewhere in the country. One is the largest freshwater lake of the country, while the other is a floating island made up of organic waste on the same lake, home to the only tourist house in the region.

The lake itself includes many other floating islands that support the fishing villages and also consist of organic waste. The virgin water, the labyrinth of boat routes, the surrounding greenery and the fascinating crackling sunset, provide a fascinating site. Loktak Lake and Sendra Island are treasures of a dynamic ecosystem and require protection and preservation

Location: Loktak Lake has located in state Manipur and it is just 48KM from Imphal.

• The Loktak lake: the largest freshwater lake (soft) in north-eastern part India.
• Loktak lake also called the only floating lake in the world because of the floating phumdis (heterogeneous mass of vegetation, soil and organic materials Different stages of decomposition).
• The etymology of Loktak is Lok = “stream” and tak = “the end”.
• This place has Keibul Lamjao National Park, which is the last natural refuge of the endangered deer or Sangai Manipur (Cervus eldi eldi), one of three subspecies of Deer Eld, covering an area of 40 km2 ( 15 square miles), is located In the southeastern shores of this lake and is the largest of all Phumdis in the lake.

This ancient lake plays an important role in the economy of Manipur. It serves as a source of water for drinking water supply, irrigation and electricity production. The lake is also a source of livelihoods for rural fishermen who live in the surrounding areas and Phumdis, also called “phumshongs”. Human activity has resulted in heavy pressure on the lake ecosystem. 55 rural and urban places around the lake have a population of about 100,000 people. Given the ecological status and its biodiversity values, the lake was originally designated as a wetland of international importance under the Ramsar Convention on 23 March 1990. It was also recorded under The Montreux Record on 16 June 1993, “a dossier on Ramsar sites where changes in ecological character have occurred or are likely to occur”.

Phumdis are a series of floating islands, exclusive to Loktak Lake located in the state of Manipur, in northeastern India. They cover a substantial part of the lake surface and are heterogeneous masses of vegetation, organic matter and soil, at different stages of decomposition. The largest mass of phumdi occurs in the southeastern part of the lake, covering an area of 40 square kilometers (15.4 square miles). This mass is the largest floating park in the world, named Keibul Lamjao National Park.

The park was formed to preserve the subspecies of endangered Eld deer, known as Meitei tongue, native to this region.
Phumdis are used by local people to build their huts for fishing and other livelihoods, and are inhabited by about 4,000 people. Athapums are artificial circular phumdis, built by villagers as enclosures for fish farming; Aquaculture has caused the proliferation of phumdis in the lake.

A rich biodiversity with a heterogeneous habitat was recorded during a scientific survey conducted between January 2000 and December 2002 in various habitat areas of the lake. The rich biodiversity of the lake includes 233 species of aquatic macrophytes of floating emergent, floating, rooted types, and submergent. But in the downward trend of vegetation, the important flora registered is as low.

57 species of waterbirds and 14 species of birds associated with wetlands were noted in the lake, including 28 species of migratory birds (most migrate to different parts of the northern hemisphere beyond the Himalayas). There were also 425 species of animals: 249 vertebrates and 176 invertebrates). The list includes rare animals such as Indian python, deer and sambhar. The Keibul Lamjao National Park is the natural habitat of the most endangered deer, Cervin eldi eldi, which has already been extinguished, which was declared as a national park to preserve and conserve this species of Deer of Eld.

The fish yield of the lake is about 1,500 tons (6,600,000 lbs.) Each year. The State Fisheries Department has introduced millions of Indian and exotic major carp fry. The natural catch fishery without the requirement of a lease or license was also in vogue in the lake. Lake fishing is now a mixture of capture and cropping systems. Nine mini-hatcheries opened by the state government have the capacity to produce one million fishes in one day. Fifty percent of the fishes were grown in Loktak Lake and the balance was distributed to the recipient fisheries committees. The new varieties of fish introduced into the lake were the silver carp, grass carp and old varieties of local fish such pangba, Channa punctatus (ngamu), tharak Ngashap Anabas testudineus (ukabi) and Anguilla (ngaril) and declared to be serious decline.

The climate of Manipur is largely tropical and occurs around the pleasant temperature range of 25 to 35 degrees, which means that one can visit the breathtaking lake at any time of the year. Since Manipur is a hilly area, you need winter wear during the evening to protect yourself from the cold.

How to reach Lake Loktak and Sendra Island

Flights to Loktak Lake: The nearest airport is at Imphal which is only 48 km from Loktak Lake and can be reached by taxi.

Air: The nearest airport is at Imphal which is only 48 km from Lake Loktak and can be reached by taxi.

Train: The nearest railway is Dimapur, which is 215 km from Imphal and can be reached by taxi or public bus.

Road: Lake Loktak is at Moirang which is connected by Imphal via NH 53. You can take a taxi from Imphal or take public buses to Moirang.

Where to stay at Loktak lake

The area has only a few places where the accommodation is located, among which is the tourist residence of Sendra Island. Alternatively, you can search for accommodation in Imphal which has more options for all budget sizes.

Besides the lake and islands, Keibul Lamjao National Park is an attraction almost next to the area and should be explored for its wild and marine life.

Photography and Boating are the most enjoyable experiences here. Experience at Loktak Lake and Sendra Island. Being at Lake Loktak and Sendra Island, you witness the life and livelihoods of local fishermen and their survival under such special conditions.

The place has a diverse fish life, widely fished by the fishing communities here, offering the opportunity to taste fresh and sweet lake fish like Major Carp and Grass Carp.

Visit the lake and the island for a day trip from Imphal via Moirang. One can follow it with the national park Keibul Lamjao, nearby, the next day.

Lake Loktak and the surrounding area are ecologically sensitive and, therefore, make sure you leave behind a minimal carbon footprint.