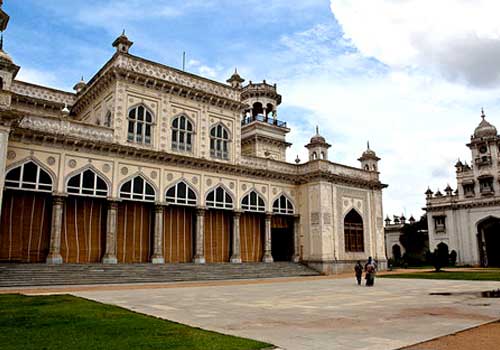 Purani Haveli is located to the southeast of the Afzal Gunj Bridge near Dewan Devdi in Hyderabad city. It is a U-shaped complex with a central European-style staged building that was originally established as residential quarters of Mir Momen who was the Peshwa of Mohammed Quli Qutub Shah towards the 16th century. The main building of Purani Haveli presents European architecture of the 18th century which can be seen in its antique furniture and intricate interior decorations.

By traversing the entire haveli you can see vast courtyards surrounded by deep chambers and verandas that have semicircular European arches. It is a U-shaped complex. On its center there is only one staggered building which is the main royal palace. The courtyard is Indian in style. The architectural style seems to be complementary. Although with time, the structure loses its original grandeur, some of the rooms haveli boasts still colored walls and mosaic floors that are almost intact. It is bordered by two oblong wings in double row.

There are beautiful courses in both wings with rooms around them. Some of the rooms still have mosaic floor and tiled walls with their colors always again. The western wing houses the closest wardrobe that is the longest in the world, which was made in two levels with a wooden elevator. It is said to have the ability to hang about 730 pairs of royal attraction. At present, the haveli has the Nizam Museum and consists of various artifacts from the last Nizam in Hyderabad. Some of them are souvenirs and souvenirs donated by the various dignitaries of the world to the last Nizam with a Rolls-Royce of 1930, a Packard and a Jaguar Mark V.

There is also a library and the Mukarram Jah Technical Institute in the complex. You can visit the haveli all week except Friday. The visiting hours are from 10:30 to 17:00. The entrance fee for Purani haveli for adults is Rs. 80 per person and for children it is Rs. 15 per person. The charges for the camera can vary from Rs.150 to Rs. 500.

In the 19th century, the sixth Nizam of Hyderabad Nawab Mir Mahboob Ali Khan Siddiqi again made this place his official residence. It was then that the glory and grandeur of the past had returned to Purani Haveli. Purani Haveli is known for its captivating combination of 18th century European facades and traditional Indian courts. It presents an image of the city of Hyderabad in the 18th century.

Timings Of Purani Haveli Hyderabad: Purani Haveli will be closed on Friday and opened in all other days of the week from 10:30 AM till 5:00 PM.

How To Reach: This place is located in the city center very near to iconic charminar. So Purani Haveli can be easily reached by public and private transportation.