• Telangana State Archaeology Museum has 2,353-year-old Egyptian mummy stands as main attraction of the museum.
• The museum helps visualize all information, exhibits, artifacts and galleries in digital format, to enhance the user experience. 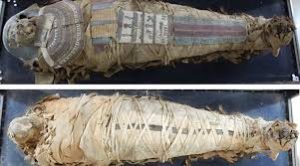 Telangana State Archaeology Museum was earlier called as AP State Archeology Museum / Hyderabad Museum is located at Public Garden in Hyderabad. It is one of the oldest museums not just of Hyderabad but also in South India. The place where the museum has been built was discovered by the an archaeologist Henry Cousens in the 19th century. The museum’s current building reflects Indo-Islamic architecture with high arches, subtle domes, projected sails and stylistic windows.

Archaeologist Henry Cousens was the first person to explore the site in the early 19th century, and later the place was excavated, the process was performed under the supervision of Nizam of Hyderabad. The excavated objects were placed in a museum built on the old site in the 1920s by Mir Osman Ali Khan, VII Nizam. In 1931 the museum was formally inaugurated. The Nizam contributed to its collection of art objects in personnel as well as antiques recovered from its dominance for display. The Museum of Hyderabad was then renamed, as a State Museum under the Department of Archeology and Museums.

The Museum presents Hindu, Jain and Buddhist sculptures and decorative art objects, bronzes, paintings (copies of Ajanta, Chugtai, Miniature and Modern) and objects from the 18th to the 19th century in a during that Periods. The main attraction of the museum is its 2,353-year-old Egyptian mummy, reported to Hyderabad by the son-in-law of Nizam Mahbub Ali Khan, who had given it to the last Nizam Mir Osman Ali Khan. He purchased this for a amount of 1000 pounds. There is also an enormous gallery on Buddha and a wide variety of archeological objects gathered from the Nizam era and the Kakatiya dynasty.

The interpretive center will help the State Museum located in the Hyderabad Public Gardens, connecting to the technical era and projecting its attributes as one of the richest depots of antiques and art in the country. It helps visualize all information, exhibits, artifacts and galleries in digital format, to enhance the user experience. This can improve the scope and activities of the state museum as well as to reach more visitors. The multi-touch interface gives a feeling of sensation among visitors who would not only see these exhibits but also the rich heritage where they are part of the wonderful experience. LED TVs offer an impressive viewer experience that is an added value for the museum.

The museum with some of the impressive and famous exhibitions such as the Egyptian mummy, important Buddhist and yellow relics, the Buddhist gallery, the Satavahana period pieces, the Brahmanic gallery and the Jain Gallery, the armies and armor gallery, the sculptures, the Numismatic Gallery, the Ajanta Gallery, the bronze figures of the Vijayanagar and Chola eras, Roman parts, and so on. offers a visually delightful experience for visitors. The applications in the interactive interpretation center will inaugurate a new identity for the museum in the generation of social media and will appeal to both through the use of such effective visual media. 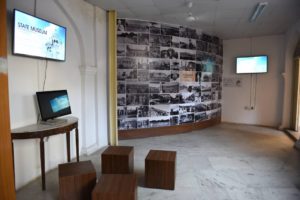 The collection is spread over two floors of the heritage building, 2 floors with semi-circular galleries, in a separate building from the Contemporary Art Pavilion, and in an annexed building behind it. The Sculpture Garden Gallery displays 93 sculptures and architectural objects dating from Satavahana (BC 2nd century) to the Post Vijayanagara period (17th century AD) in various stone media. In the garden, two mandapas with four pills belonging to the times Kakatiya and Vijayanagara, a number of Veergals (Hero Stones), Panchaloha, Iron Cannons and a Wooden Cart moved from the village Jetprole were displayed. The Museum Shop and its counter are located in the entrance complex.

How To Reach: The State Museum is accessible by road because of its location near the public gardens and is at a distance of about
7 km from Secunderabad railway station
3.5 km from Koti bus station
30 km from Rajiv Gandhi International Airport
Source: http://telanganamuseums.in/