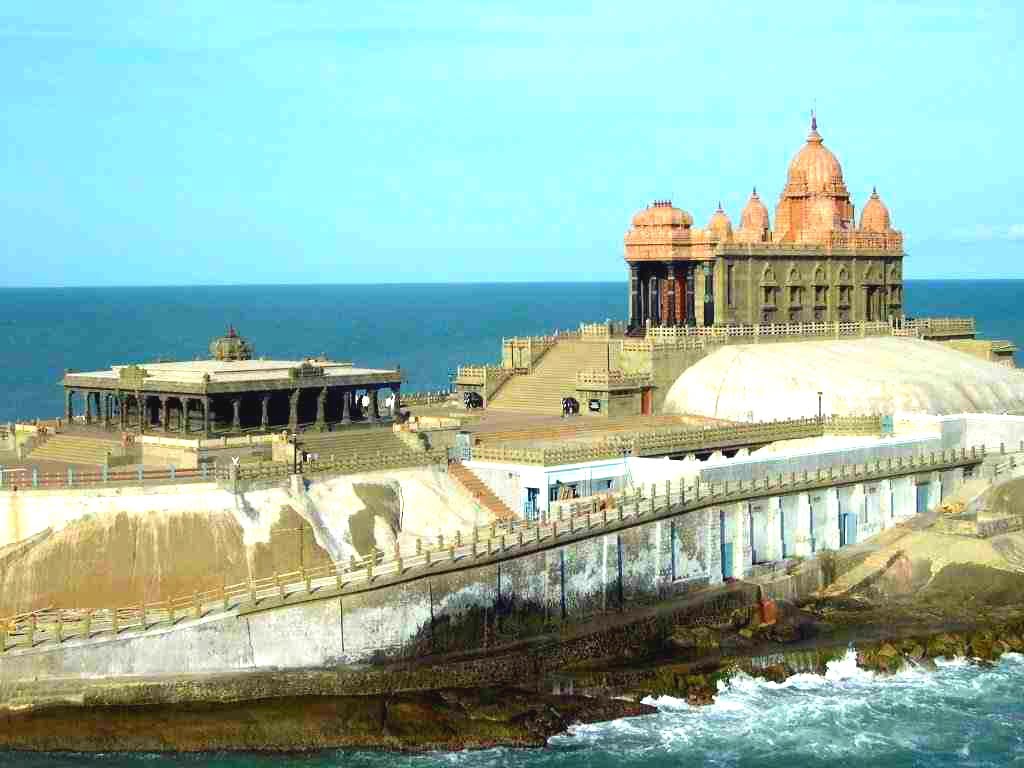 • When was it constructed: 1970
• Time taken: six years
• Where is it situated: 500 meters east of the sub-continent of Vavathurai, Kanyakumari, India
• Why was it constructed: as a memorial to Swami Vivekananda
• Architectural style of memorial: blend of classical and modern architectural styles of India
• Visiting hours: daily, from 7 am till 5 pm.• The entrance fee is Rs. 10 / –

How to reach Vivekananda Rock Memorial

Kanyakumari is connected by bus with the main cities of South India and by train with several Indian cities, while the nearest airport is in Trivandrum (67 Km). The Kanyakumari ferry service can be used to reach Vivekananda Rock. The colossal and imposing “Vivekananda Rock Memorial” is located off 500 m east of the mainland of Vavathurai, Kanyakumari, in the southern tip of India. It sits on one of the two adjacent rocks that emerge from the Indian Sea and consists of two major structures, the Vivekananda Mandapam and the Shripada Mandapam.

This impressive memorial was built in honor of the great spiritual leader and Hindu monk of India, Swami Vivekananda, who would had achieved enlightenment here after meditating for two days before his famous trip to Chicago. This rock is also considered sacred because local legends say that the goddess kanya Kumari has given blessings to the rock to make it divine. The memorial today is a masterpiece of architecture with different styles of architecture from India and attracts thousands of visitors throughout the year. A boat cruise to the place, the only means of transportation, makes the trip more enjoyable to visitors.

Swami Vivekananda visited Kanyakumari on December 24, 1892, before his trip to Chicago where he participated in the “World Religious Conference” of 1893. He said that his meditation on rock for two days has made him to reach enlightenment. He was one of the prominent disciples of Ramakrishna, yogi and an Indian mystic of the 19th century, and then played a important role in the introduction of the Indian philosophies of Yoga and Vedanta in Western countries. In January 1962, on remembrance of Swamiji’s birth, the “Kanyakumari Committee” was set up by a group of people who aimed to establish a Swamiji memorial on the rock.

The “Ramakrishna Mission” in Madras also designed such a memorial during this period. However, the concept has encountered some obstacles with local Catholic people who show aversion and set up a large cross on rock and, on the other hand, the Hindus were protesting against this movement of the Catholic population. As things got worse, the rock was marked as a forbidden place and armed guards were stationed to protect it. On January 17, 1963, as permitted by the government, a tablet was placed on the rock that mentioned its association with Swami Vivekananda.

Eknath Ramkrishna Ranade, a prominent Indian social and spiritual reformer and he was also former “Rashtriya Swayamsevak Sangh” (RSS) mandate that was profoundly influenced by Swamiji’s teachings, played a key role in the establishment of the memorial. He started the “Vivekananda Rock Memorial Organizing Committee” which quickly opened several branches in India to obtain support and raise funds in the continuation of the memorial.

As political obstacles rose, including the rejection of the concept by Humayun Kabir, Minister of Education and Culture, and Madras State Minister Minjur Bhaktavatsalam, Ranade, Gathered signatures of 323 parliament members(MP’s) in support of the memorial Following which Smt. Indira Gandhi who was Prime Minister of India at that time has approved the project. The Vivekananda Rock Memorial was built in a short period of 6 years in 1970, which involved about 650 workers. It was inaugurated and dedicated to the nation that year.

A Glance at Memorial

A blend of traditional and modern architectural styles from India, particularly a blend of style of architecture from Tamil Nadu and West Bengal, is palpable from the design of the memorial. While the commemorative Mandapam resembles Sri Ramakrishna’s temple in Belur, West Bengal, the design of its entrance features architectural styles of Ajanta and Ellora. It houses a bright bronze statue of Swami Vivekananda in his famous position ‘Parivarjak’ made by the famous sculptor Sitaram S. Arte.

The Rock on which memorial was constructed is also called “Sripada Parai” because it is believed that the goddess Kanya Kumari blessed the place with the touch of her healthy feet. In reality, rock has a projection of brownish color and looks like a human footprint. This projection is considered and called Sri Padam and a sanctuary called “Sri Padaparai Mandapam” was built on site.One of the two main structures of the memorial is the main sanctorum, the “Shripada Mandapam”, which is located on an outer platform. This room, in square form, also includes a ‘Garbha Graham’, an ‘outer Prakaram’ and an ‘inner Prakaram’. The other significant structure is the “Vivekananda Mandapam” built in honor of Swamiji. The sections included in this structure are the “Mukha Mandapam”, “Dhyana Mandapam”, Namashtubhyam to the son of jagadamba and “Sabha Mandapam”.

The design of the ‘Dhyana Mandapam’ or meditation room features the integration of various styles of temple architecture from India. The mandapam which allows visitors to sit, relax and meditate in a quiet and peaceful atmosphere has six adjoining rooms. The “Sabha Mandapam” which means the Hall of the Assembly which consists of a statue section entitled “Pralima Mandapam”, a corridor and an outer courtyard surrounding the hall. The statue of Swamiji is positioned in such a way that its vision falls directly on the Shripadam.

On January 7, 1972, Ranade founded the spiritual organization called “Vivekananda Kendra” next to the memorial. The organization based on the principles preached by Swami Vivekananda has spread its wings in more than 18 states of India which include 600 branch centers and more than 200 full-time dedicated workers. The activities of the organization include the implementation of rural development activities, seminars and yoga classes.

A Trip to Vivekananda Rock Memorial

This sacred memorial symbolizing purity and unity preached by Swami Vivekananda emerged as one of the most revered monuments of India and one of the destinations to visit Kanyakumari. The rock also offers a striking view of the confluence of the Indian Ocean, Arabian Sea and the Bay of Bengal. It can be visited any day of the year from 7:00 to 17:00. The entrance fee is Rs. 10 / -, the camera is still Rs. 10 / – and the video camera is Rs. 50 / -.